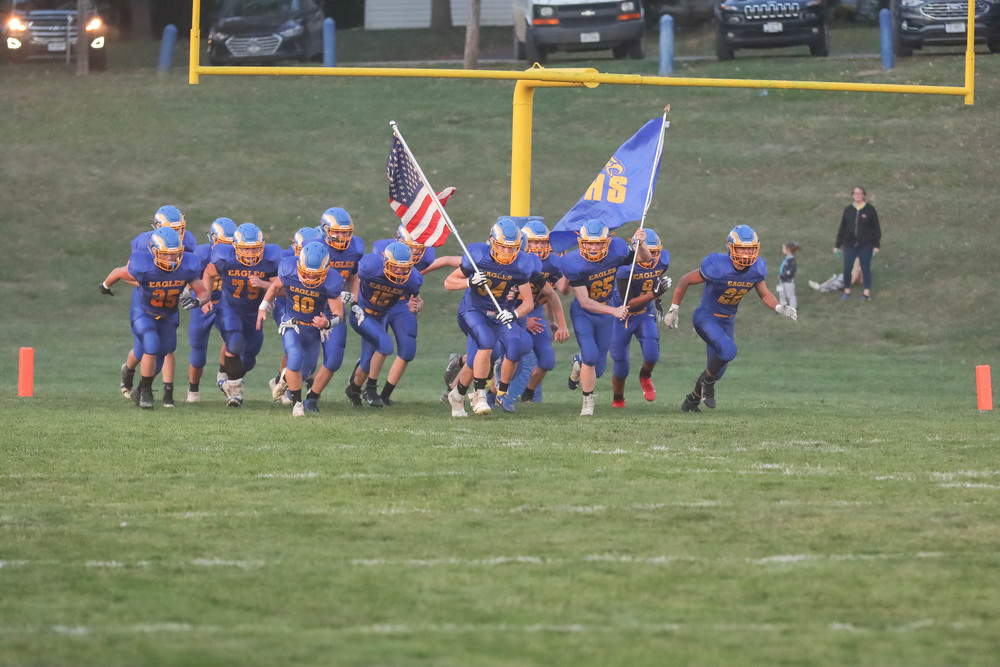 The Allen Eagles erupted for 35 first quarter, and 33 second quarter points to roll in an 81-12 Homecoming win Friday night against the Walthill Blujays in Allen.

The win secured the district championship, and an automatic berth in the Nebraska state football playoffs beginning October 22.

Fast and furious were the scoring drives, assisted with two defensive scores as well as two special team returns for touchdowns.

The scoring barrage allowed all the Eagles playing time in the game, as the Eagles held a 68-6 lead at intermission.

Kobe Kumm added three scores on runs of 3 and 20, while returning a punt 32 yards for another score.

Ryan Anderson pitched in two touchdown runs of 2 and 19 yards, while freshman, Michael Dickens sprinted to a 17 yard touchdown as well.

Reed Hingst had a defensive back career night with two interceptions and returns for touchdowns of 65 and 70 yards.

Joe Grone added a 62 yard kickoff return for the Eagles.

The win moves the Eagles overall record to 5-0, 3-0 in the district.

Next action scheduled is Friday, October 16 at Emerson-Hubbard. Kickoff is set at 2:45 p.m.

“A very good win, considering the team had another two week gap in our schedule. The kids executed what was asked of them defensively very well, keeping the shifty running of Walthill backs in check. The offense only ran 33 plays and several were for younger kids, so efficiency was good as well. This team still has business to take care of, and it will be paramount that they are prepared for Emerson-Hubbard on Friday. The team is now to the point of the year, that every game could be the last game, whether by a loss or by Covid-19, so we will do what it takes to protect our interests as a team, either by the preparation for opponents or protecting of our team from exposures. Good win team!”

More pictures from this game can be found on the Republicans Facebook page!