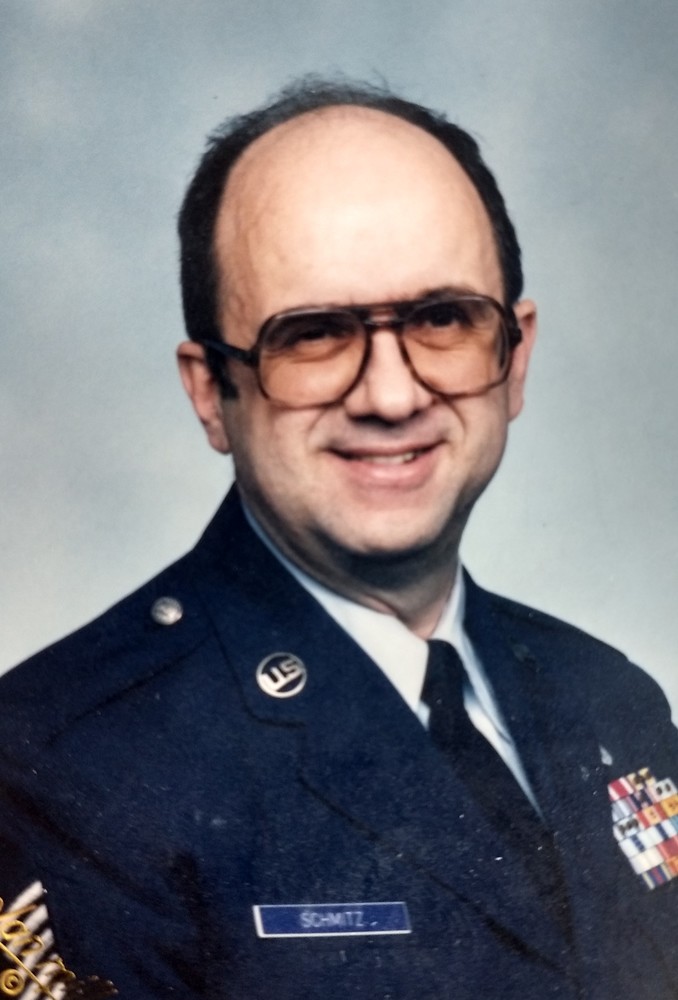 NOTE:  In our ongoing series called, “Veteran Stories,” this week we feature Michael D. Schmitz, or “Father Mike,” as he is known to most Crofton area residents. Before his ordination as a Catholic priest in 1996, Schmitz served in the Air Force around the world, including in Germany, Vietnam, Offutt AF Base in Omaha and even at Andrews AFB for Air Force One.

Michael Schmitz was born on March 11, 1946, the second child in a family of seven children, growing up on a farm near Currie, Minnesota. He graduated from Immaculate Heart of Mary High School in Currie in 1964. Hoping to begin a service career in the U.S. Air Force, Schmitz enlisted on May 2, 1966 at Marshall, Minn. He did basic training at Lackland, Texas. During that time, he took extra duty as a chapel guide, which involved encouraging and being responsible for troops attending church on Sunday.

From June 1966 until April, 1968, Schmitz was assigned to the 19th Bombardment Wing, Operations and Training Division at Homestead AFB in Florida. Serving as an office manager, his office’s duties involved making sure B-52 and KC-135 crew members were properly trained. On his off days, Schmitz assisted with poor Cuban immigrants in South Florida. In April 1968, Schmitz was assigned to Bitburg Air Base in Germany, in the 36th Security Police Squadron, as an office manager. He processed police reports and made sure paperwork followed the proper channels. During this time, he was able to serve as an usher and taught religion classes on Sundays. Schmitz also gained valuable experience working part time at the officers’ club as a food waiter.

In 1971-72, he was stationed at Headquarters, 7th Air Force, in Vietnam. He served as office manager for the target intelligence office, planning the following day’s bombing missions that had been approved by the Pentagon and the President. During that time, Schmitz recalls seeing Bob Hope at a USO show on Christmas Day in 1971. During two subsequent tours at Offutt AFB back in Omaha, Schmitz served as a mail clerk with the 544th Aerospace Reconnaissance Technical Wing and then from July 1976 until April 1978, he was an office manager for the Air Force Global Weather Central, in the operations division. In between his stints at Offutt, Schmitz was assigned to the 89th Aircraft Maintenance Squadron at Andrews AFB in Maryland. The office where he worked was responsible for obtaining materials for the Presidential Fleet of Aircraft during the President Nixon and President Ford Administrations, which included Air Force One. He vividly recalls watching President Nixon wave to the crowds for the last time as he departed, after resigning the Presidency in 1974.

During that same time, he worked again as a waiter at the noncommissioned officers club, eventually taking on a role as the banquet manager. The club booked many well known entertainers of the day like Barbara Mandrell, Bill Munroe and the Platters.

Mike eventually joined the Air Force Reserve, serving in the 28th Medical Services Squadron at Offutt. He was transferred to the 440th Medical Reserve Squadron at Billy Mitchell Field in Milwaukee in 1990. At that time, he was called up to active duty during Operation Desert Storm, and was stationed in Rhein Main Air Base in Germany. After leaving active duty and serving in reserve, Schmitz worked for Valentino’s Restaurants in Lincoln, and as a computer operator at Offutt. In August 1990, he entered the seminary.

Father Mike was ordained as a priest on June 1, 1996 by Archbishop Elden F. Curtiss of Omaha. Over the years, he served as parish assistant pastor at St. Isidore Parish in Columbus and St. Gerald in Ralston; and parish pastor at St. John the Baptist, Fordyce, St. Boniface, Menominee and St. Joseph, Constance. From 2008 to 2016, Father Mike served as parish pastor at St. Rose of Lima in Crofton and St. Andrew in Bloomfield. During that time, he became an important spiritual leader within the Crofton community. After retiring from active ministry and moving to Majestic Bluffs in Yankton, where he continues to serve as chaplain, Father has continued to fill in at weekend Mass in Crofton on occasion, as well as helping out with other sacraments like Confession. Crofton baseball and high school sports fans are used to seeing Father Mike in the stands, rooting on the Crofton teams. Although he has had some physical challenges in recent years, Father recently completed his autobiography and is working now on finding a publisher for the work. During the course of his life, he certainly has served both God and country very well.